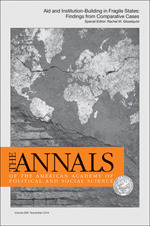 According to recent estimates, about 1.5 billion people are affected by the conflict and instability that characterize fragile states, defined as those that are unable to fulfill basic state functions. This volume of The ANNALS addresses the questions of why and how some states succeed in becoming more robust, and others do not.

Paving new ground in theory development, the articles in this volume explore factors that contribute to institution-building in fragile states through comparative case studies. Such factors include the limits (and benefits) of domestic and foreign aid; the impact of a state’s historical strength; the impact of colonial and postcolonial interventions; and the political economy incentives for political leaders to sustain state fragility. Overall, the studies illustrate that aid has both positive and negative effects on institution-building in fragile states. Aid has the potential to contribute to state robustness through changing incentives and shaping institutional structures directly. However, aid can also weaken states, depending on a state’s domestic institutional legacy and political dynamics. The studies call for more research into theories of institution-building to further enhance those that have been discussed in this volume of The ANNALS.