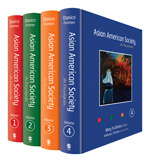 Asian Americans are a growing, minority population in the United States. After a 46 percent population growth between 2000 and 2010 according to the 2010 Census, there are 17.3 million Asian Americans today. Yet Asian Americans as a category are a diverse set of peoples from over 30 distinctive Asian-origin subgroups that defy simplistic descriptions or generalizations. They face a wide range of issues and problems within the larger American social universe despite the persistence of common stereotypes that label them as a “model minority” for the generalized attributes offered uncritically in many media depictions.

Asian American Society: An Encyclopedia provides a thorough introduction to the wide–ranging and fast–developing field of Asian American studies. Published with the Association for Asian American Studies (AAAS), two volumes of the four-volume encyclopedia feature more than 300 A-to-Z articles authored by AAAS members and experts in the field who examine the social, cultural, psychological, economic, and political dimensions of the Asian American experience. The next two volumes of this work contain approximately 200 annotated primary documents, organized chronologically, that detail the impact American society has had on reshaping Asian American identities and social structures over time.

Available in both print and online formats, this collection of essays is a must-have resource for general and research libraries, Asian American/ethnic studies libraries, and social science libraries.

"....The material in these [first] two volumes is suitable for introductory college-level courses....These latter two volumes would be mostly useful to scholars interested in more in-depth study of the Asian experience. For East Asian studies, the primary document selection is extensive. Each document is preceded by a paragraph that sets that document in its proper historical perspective....An excellent reference for both the novice and seasoned scholars interested in East Asian Americans."