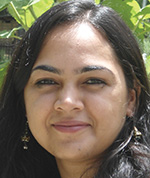 Bhavna Singh is Country Coordinator for the V-dem Project by the University of Gothenburg, Sweden, and Former Senior Research Officer, Institute of Peace and Conflict Studies (IPCS), New Delhi. She is a Doctoral candidate at the Chinese division on the Centre of East Asian Studies, Jawaharlal Nehru University, New Delhi. Her work focuses on Chinese nationalism, sub-nationalisms and China’s foreign policy with regard to the USA, Japan and South Asia. She is particularly interested in separatist and sub-national tendencies in the regions of Xinjiang, Tibet, Taiwan and Inner Mongolia. She is the author of the book China’s Discursive Nationalism: Contending in Softer Realms (2012) and has written for several esteemed journals such as the Economic and Political Weekly, Mainstream Weekly, Nam-today, World Focus, Epilogue and the China Daily. She was part of the youth exchange delegation between China and India in the year 2008 and was nominated to the ‘Taiwan Study Camp for Future Leaders of South Asia’ in 2010.
India, China and Sub-regional Connectivities in South Asia