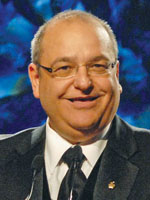 Dominic Belmonte taught at York Community High School in Elmhurst, Illinois, for twenty years as an English teacher and chairman of the English Department. He is now President and CEO of the Golden Apple Foundation for Excellence in Teaching. A member and past chairman of the Golden Apple Academy of Educators, in 1989 he co-created the Golden Apple Scholars of Illinois program, a pre-induction teacher preparation experience that is now the Golden Apple Foundation’s largest program, named by Harvard University as one of 15 programs out of 1,200 nationwide as a finalist for its Innovations in American Government award. In 1996 Belmonte also co-created the GATE (Golden Apple Teacher Education) program, an alternative pathway to teacher certification for mid-career adults wishing a career in teaching secondary math or science or teaching elementary school children.
Teaching From the Deep End
Teaching on Solid Ground