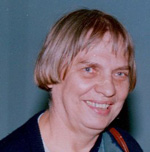 Dr. Gail Omvedt has been living in India since 1978, became an Indian citizen in 1983, and works as a freelance writer and development consultant. She has also worked actively with various social movements including the Dalit and anti-caste movements, farmers’ movements, environmental movement and especially with rural women.

Besides having undertaken many research projects, Dr Omvedt has been a consultant for FAO, UNDP and NOVIB and has served as a Dr Ambedkar Chair Professor at NISWASS in Orissa, a Professor of Sociology at the University of Pune and an Asian Guest Professor at the Nordic Institute of Asian Studies, Copenhagen. She is currently a Senior Fellow at the Nehru Memorial Museum and Library and Research Director of the Krantivir Trust.

A prolific writer, Gail Omvedt has published a large number of books including Dalit Visions (1975), Violence against Women: New Theories and New Movements in India (1991) and Dalits and Democractic Revolution (1994) besides having translated Growing up Untouchable in India: A Dalit Autobiography. She is currently engaged in translating Tukaram, considered to be the greatest Marathi writer of all time.