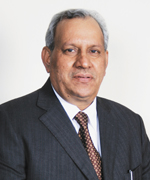 Prof. (Dr.) Ranbir Singh is the founder Vice-Chancellor of National Law University, Delhi established by the Delhi Government in 2008. He is a Council Member of the Association of Commonwealth Universities, UK. He is Vice-President & EXCO Member of SAARCLAW India. He is Member of the Eminent Persons Advisory Group (EPAG) of Competition Commission of India. He is Member of the State Higher Education Council, constituted by the Govt. of NCT of Delhi. He is Past- President of the Association of India Universities (AIU) and Shastri Indo-Canadian Institute (SICI). He was the founder Vice-Chancellor of NALSAR, University of Law, established by the Andhra Pradesh Government in 1998. He has been there for ten years as the Vice-Chancellor of the well-known premier institution for legal education and research in the country which was rated as one of the Best University in the Country in the year 2008 in ‘India Today’. He has been a Vice-Chancellor for over 18 years now.

Challenging The Rules(s) of Law