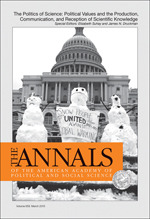 As science advances toward a greater degree of explanatory credibility and as associated technological know-how accumulates, the ability of the public and private sectors to intervene in citizens’ lives in increasingly sophisticated ways also increases. At the same time, we are living through a moment when the political sphere is incredibly polarized. When these two phenomena intermingle, the result can be intense political controversy as well as important opportunities lost. Furthermore, as the politicization of science increases, there is a spill-over effect whereby citizens lose faith in science generally. At risk is not just the helpful application of science through technology but the funding of basic scientific research itself. In short, value-based assessments of science and related technologies—while often understandable and in some cases even reasonable—nevertheless can, if not tempered, drive political gridlock and stall scientific advancement toward greater understanding of ourselves and the world around us. A critical first step to solving problems where they exist is often simply shining a bright light on those problems, which is primarily what the authors in this volume do.

The twelve original research articles and three commentaries contained within this volume provide a wealth of information. Among the more novel and important findings and arguments are the following: