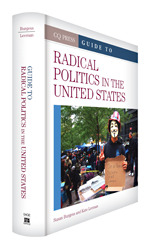 The CQ Press Guide to Radical Politics in the United States is a unique work which provides an overview of radical U.S. political movements on both the left and the right sides of the ideological spectrum. It focuses on analyzing the origins and trajectory of the various movements, and the impact that movement ideas and activities have had on mainstream American politics.

This guide is organized thematically, with each chapter focusing on a prominent arena of radical activism in the United States.

Seeking to provide an accessible, balanced, and well-documented discussion of topics often overlooked in political science, this book includes an introduction to anarchism, communism, and socialism as well as the Chicano movement, civilian border patrols, Black power, the Ku Klux Klan, ACT-UP, the militia movement, Occupy Wall Street, farmers’ rebellions, Earth First!, the Animal Environmental Liberation Front, and many others.

"In a straightforward, nonjudgmental style and an easily readable format, including photographs and feature stories, this attractive book focuses on social, minority, labor, environmental, and gender movements from the late 19th century to the present... Guide is an excellent resource for high school and junior college students as well as laypeople interested in researching history, political science, labor, gender, or minority studies...