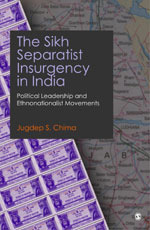 Share
Courses:
Leadership in Political Science
August 2008 | 332 pages | SAGE India
Download flyer
The Punjab crisis, a two-decade long armed insurgency that emerged as a violent ethnonationalist movement in the 1980s and gradually transformed into a secessionist struggle, resulted in an estimated casualty of no less than 25,000 people in Punjab. This ethnonationalist movement, on the one hand ended the perceived notion of looking at Punjab as the model of political stability of independent India, and on the other raised several politico-social questions which had a great effect on Indian politics for decades to come.

The Sikh Separatist Insurgency in Punjab-India provides an authoritative political history of the Sikh separatist insurgency in Punjab by focusing on the "patterns of political leadership", a previously unexplored variable. It describes in detail the events which led to the emergence of the "Punjab Crisis", the various means through which the movement was sustained, and the changing nature of political leadership and courses of military action which necessitated its decline in the mid-1990s.

Providing a microhistorical analysis of the Punjab crisis, the book argues that the trajectories of ethnonationalist movements are largely based on the interaction between self-interested political elites, who not only react to the structural choices they face, but whose purposeful actions and decisions ultimately affect the course of ethnic group-state relations. It consolidates this theoretical preposition through a comparative analysis of four contemporary global ethnonationalist movements—those that occurred in Chechnya, Northern Ireland, Kashmir, and Assam.

This book will be a good reference source for students and academics studying political science, history, South Asia and the Sikhs and also for public policy practitioners in multi-ethnic societies.

Foreword
Dr Paul Wallace
Preface
I: INTRODUCTION
"Patterns of Political Leadership" and Ethnonationalist Insurgency
Sikh Ethnic Identity and Early Post-Independence Politics in Punjab
II: THE EMERGENCE OF THE SIKH ETHNONATIONALIST MOVEMENT (1978-1984)
Beginnings of Sikh Extremism (1978-1981)
Emergence of Ethnonationalist Violence (1981-1983)
Agitation, Ethnic Insurgency, and the Road to Operation Bluestar (1983-1984)
III: THE SUSTENANCE OF THE SIKH ETHNONATIONALIST MOVEMENT (1984-1992)
Failed Political Compromises and Re-marginalizaion of Sikh Moderates (1984-1986)
Reorganization of the Militants and the Armed Struggle for Khalistan (1986- 1988)
The Divided State and Electoral Victory of the Extremists (1988-1990)
Escalating Factionalism and Internecine Violence within the Separatist Movement (1990-1992)
IV: THE DEMISE OF THE SIKH ETHNONATIONALIST MOVEMENT (1992-1997)
The Crushing of the Violent Sikh Ethnonationalist Movement by the Unified State (1992-1993)
The Return of Normalcy to Punjab and Sikh Politics (1993-1997)
V: CONCLUSION
"Patterns of Political Leadership" and Ethnonationalist Insurgency in a Comparative Perspective
Glossary
Select Bibliography
Index

The book is a diligent, dense narrative of the insurgency in India’s state of Punjab from 1970 to the 1990s…The book provides a valuable compilation of details about the Punjab insurgency – a narrative that goes year by year and almost month by month at some junctures.

The Journal of Asian Studies

It is an important resource on the state of Punjab and the journey that it has emerged out of. The work has to be read as carefully as it has been written.

Jugdep S Chima`s The Sikh Separatist Insurgency in India addresses not only this turning point, but encompasses, within its 315 pages, a commendable account of the rise, sustenance and decline of the Sikh quest for an independent state. It should be useful reading for public policymakers and the intelligence community. The book is the story of a model province`s dramatic transformation into a hotbed of an ethno-nationalist movement and its mutation into an armed secessionist uprising for the creation of an independent Sikh state.