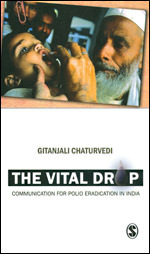 Share
Courses:
Public Health
July 2008 | 340 pages | SAGE India
Download flyer
The Vital Drop is a book on the success of the Polio campaign in India. Since the last major polio outbreak in India in 2002, several innovative and creative strategies have been employed to ensure that every child is reached, and the programme has been a major success.

This book is an important record of the communication journey by UNICEF that began in 2002, and explains how the programme became such a success. It helps explain why communication is such a 'vital drop' not only for polio eradication, but also in the wider interest of child health and well-being.

The book explores the variety of communication initiatives undertaken to reach out to the country's diverse, segregated and mobile communities-especially in the endemic northern states. The book lays emphasis on evidence-both social and epidemiological-and shows the choices, approaches and course corrections that were galvanized to support polio eradication by families as well as communities. Also, the sophisticated surveillance and communication network described in detail can be used to improve the outreach and efficacy of other public health programmes.

Foreword
Kul Gautam and Dr David Heymann
Introduction
India and the Global Commitment to Eradicate Polio
Setting the Stage for Polio Eradication in India
Partnership, Advocacy and Mass Media
The Social Mobilisation Network
The Underserved Strategy
The Bihar Story:Innovations in Social Mobilisation
Shutting the Door on Polio: Other Experiences
Evidence to Drive Communication
Conclusion: The End of Polio?
Bibliography
Index
About the Author

This book explains why communication is critical for ensuring the success of public health initiatives....It records the communication journey that began in 2002 through important innovations aimed at including segregated and marginalised populations, as well as a very successful mass media campaign featuring cine star Amitabh Bachchan....Key features of the book include the variety of communication initiatives undertaken to reach out to India`s large, diverse, segregated and mobile populations; the emphasis on evidence—both social and epidemiological—and the choices, approaches and course corrections in determining communication interventions; and the importance of sophisticated surveillance and a frontline communication network.

The book explains why communication is critical in ensuring the success of public health initiatives.

The book illustrates that communication is a “Vital Drop” for any public health campaign, not just a “soft science”.