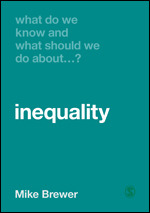 Economic inequality in the UK is currently at historically high levels and the rise in income inequality over the last 30 years is one of the largest across developed nations. But what caused this sustained increase in inequality and what does it mean for modern society in the UK?

In this book, Economist Mike Brewer discusses the causes and consequences of these high levels of economic inequality, outlining why the UK became so unequal in the 1980s and how this has developed further since the 2008 financial crash and the austerity that followed. Brewer then presents new analysis of the top 1% and 0.1%, before assessing the relevance of Thomas Piketty’s landmark work and predictions around wealth inequalities. The author then outlines six key areas that need addressing to move the UK off its high-inequality path and towards a fairer society, including wealth redistribution, social mobility, and excessive pay at the top.

Concise, precise, beautifully designed, illustrated and written. If you want to learn a lot about what matters most, in as short a time as possible, this is the series for you.

This highly accessible but scholarly series which sees leading social scientists in the UK tackle some of the key issues facing us all today is exactly the sort of publication the Academy of Social Sciences has encouraged over the years. Congratulations to SAGE on bringing it out.

What Do We Know and What Should We Do About Immigration?

What Do We Know and What Should We Do About the Future of Work?

The Limits of Neoliberalism

The SAGE Handbook of Neoliberalism

Political Economy of Caste in India

What Do We Know and What Should We Do About Social Mobility?
Show More Show Less