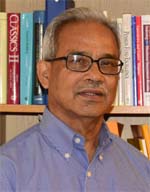 Binod B. Nayak retired from the World Bank in 2001 after more than 27 years of service. During this period, he worked in the following areas: financial modeling and forecasting, financial policy and planning, and financial risk management at the corporate level. He also worked on development finance companies and project evaluations in member countries of the World Bank.

From 1999 to 2005, he was involved with a small US-based charitable organization that worked in villages of Odisha to help the villagers after the 1999 devastating ‘Super Cyclone.’ During this time, Binod was involved in introducing microfinance to the members of the charitable organization in order to help the villagers to join SHGs. This modest attempt opened his eyes to the need for a book to provide serious exposition of microfinance to intelligent laymen. During the last eight years, he has done extensive research in order to make this book accessible to a wider audience interested in gaining a better understanding of microfinance.

Binod has an MSc in Mathematics from IIT (Kanpur), MS in Computer Science from University of Washington (Seattle) and MBA from Robert H. Smith School of Business, University of Maryland (College Park). He also holds a CFA Charter from CFA Institute, Charlottesville, Virginia.

Currently, he is working as an Independent Researcher and Financial Consultant.

The Synergy of Microfinance