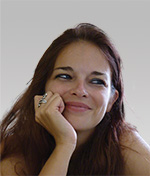 Ophélie Wiel teaches Film Studies at the Université de la Sorbonne Nouvelle in Paris. She moved to India from France a few years ago and fell in love with Mumbai and the Hindi film industry. She is a noted film critic and a renowned specialist of Indian cinema and classic Hollywood cinema in France. Her previous publications include the book Bollywood et les autres: Voyage au coeur du cinéma indien (Bollywood and Others: A Journey into Indian Cinema), published in 2011.
Rendezvous with Hindi Cinema