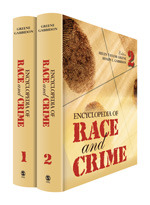 "The organization of the reader's guide—especially the groupings of landmark cases, race riots, and criminology theories—is impressive … Other related titles lack the breadth, detail, and accessibility of this work … Recommended for all libraries; essential for comprehensive social studies collections."
—Library Journal

The Encyclopedia of Race and Crime covers issues in both historical and contemporary context, with information on race and ethnicity and their impact on crime and the administration of justice. These two volumes offer a greater appreciation for the similar historical experiences of varied racial and ethnic groups and illustrate how race and ethnicity has mattered and continues to matter in the administration of American criminal justice.

Because the topic of race and crime is of wide interest and relevance, entries in this Encyclopedia are written in an accessible style to appeal to a broad audience, making it a welcome addition to academic and public libraries alike.