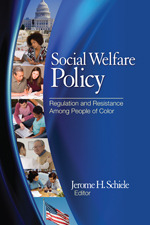 Applying the social control paradigm to people of color, this text uses a racism-centered perspective of social welfare policy analysis to examine how such policies have regulated the lives of people of color and then employs a strengths-based approach to describe how they have refused to go along with the oppressive features of these policies. It illuminates the need for culturally competent social welfare policy practitioners, illustrating how racism continues to be at the center of many contemporary social problems such as issues of employment, public and bilingual education, housing and residential patterns, citizens' rights, and affirmative action—and of the social welfare policies used to address these issues.

Appropriate for the course in terms of presenting minority issues in policy advocacy in social work practice.

Chapter 1 - Regulating the Lives of Children