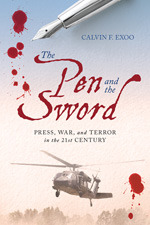 An eye-opening case study of the news at war, introducing a critical perspective on our mass media

The Pen and the Sword is the only comprehensive examination of how the media have covered the 21st Century's #1 news story: terrorism and the wars in Afghanistan and Iraq. This is the full story—from 9/11 to the Obama doctrine, and including:

The Pen and the Sword uses this tragic and eye-opening case study of the news at war to ask, "Why?" and to offer a critical perspective on our mass media, including the latest information on the underpinnings of the news business—corporate ownership, the power of elites to define the news—and adds three important new features of the media landscape:

Providing a critical perspective on our mass media, this text is ideal for undergraduate courses such as Media & Politics, International Journalism, Political Communication, Crime and Media, and Sociology of Mass Media.

Praise for this book

"I am very enthusiastic about the book's clear and forthright vision of systemic crisis, involving the social institutions of media and government. Prof. Exoo takes a very strong structural approach in his explanation; this is the most detailed analysis of media representations of the current war that I have seen. The chronological development of the journalistic narrative of the war is engaging and persuasive…This work is a good example of how responsible academics can contribute to the public dialogue."

"The writing is fantastic: Very easy to read, to understand, and to synthesize. The arguments are well crafted and well documented. This is the most up to date analysis of the media coverage of the Iraq War I have read, and it would put news coverage of the run-up to the War into context. …It's a fun read, it's accessible for students, and it's timely. What more could a professor ask for?"

"The news media pay a lot of lip service to the importance of objective reporting and to their role in maintaining a healthy democracy. This book successfully challenges both assertions. … Exoo's book provides an exhaustive illustration of what's wrong with the news media, using a very relevant and timely example."

"This text will challenge students to reexamine their beliefs about the news media, helping them to become more critical citizens. In doing this, the text would engage students' attention in crucial developments in the media, in politics, and in the intersection of the two."

1. Media, Democracy, Hegemony
Democracy and the Press
The Theory of Cultural Hegemony
America’s Place in the World: The Hegemonic Story
Another Story: American Empire
Our Manichean Media
Americans and American Empire
2. Night Falls: 9/11 and the Afghan War
“All Changed, Changed Utterly”
From Multilogue to Monologue
The Entertainment Media Enlist
The Bombing Begins
Happy Days Are Here Again: Burkhas Off, Music On!
Return of the Taliban
3. Iraq: War Comes to the “City of Peace”
Vulcanized
War Drums: Fall 2002
Final Stretch
You Don’t Say
The Entertainment Media Reenlist
Endgame
4. “And the Lord Did Shock and Awe Them That Blasphemed Him”
Power and Glory
The Official Story
Embedding: A Pre–History
Embedded
The Unembedded: At Risk and At Sea
Kodak Moments
More Inconvenient Facts, More Obfuscation
“Mission Accomplished”
5. Aftermath: “What Rough Beast, Its Hour Come Round at Last . . . "
Pictures from “The Dark Side”
A Casualty Story Becomes a Casualty
The Blood– Dimmed Tide
Obama and Beyond
6. Why?
The Commercial Imperative
Establishment Sources
Mainstreaming the Right

"This is one of the best books on media and politics in print and is strongly recommended to all audiences."

"Exoo has written an exceptionally thoughtful contribution to the politics and media literature.  This is one of the best books on media and politics in print and is strongly recommended to all audiences."

An indepth analysis of the war in Afghanistan and Iraq from the media's viewpoint and its impact on society.

A well written and laid out text that gives the insight into how the media/journalists report terrorism. This is important as it is through imedia reporting people get their understanding of terrorism.

book lacked objectivity; it seemed impossible to use this in a course unless you agreed with the author or constantly had to explain why you disagreed. Possibly it could be used as a supplemental text, but it was too single-issue to be used that way for my course.

The language of conflict: The War on Terror, counter-insurgency, WMDs, embedded correspondents,
IEDs. Anyone who has tuned in to broadcast news or read newspapers in the past 10 years will be familiar with the terms which help shape our opinions. But what is the truth? In a shade over 200 pages Exoo's The Pen and the Sword helps shed a little light on our understanding of war reporting in the 21st century.

This book offers a good insight into the role of the media during an era of heightened awareness of terrorism. The way it combines the reporting of war and its political undercurrents is a strength.

Why Study the Media?

Introduction to Media and Politics

The International Journal of Press/Politics