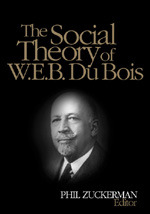 Karl Marx, Max Weber, and Emile Durkheim are widely recognized as the trinity of sociological theory. While these three sociologists were trailblazing social theorists who enhanced the study of human behavior and its relationship to social institutions, other, more contemporary scholars were just as innovative - one of those scholars being W. E. B. Du Bois.

W. E. B. Du Bois was a political and literary giant of the 20th century, publishing over twenty books and thousand of essays and articles throughout his life. In The Social Theory of W. E. B. Du Bois, editor Phil Zuckerman assembles Du Bois's work from a wide variety of sources, including articles Du Bois published in newspapers, speeches he delivered, selections from well-known classics such as The Souls of Black Folk and Darkwater, and lesser-known, hard-to-find material written by this revolutionary social theorist.

W. E. B Du Bois is arguably one of the most imaginative, perceptive, and prolific founders of the sociological discipline. In addition to leading the Pan-African movement and being an activist for civil rights for African Americans, Du Bois was a pioneer of urban sociology, an innovator of rural sociology, a leader in criminology, the first American sociologist of religion, and most notably the first great social theorist of race. The Social Theory of W. E. B. Du Bois is the first book to examine Du Bois's writings from a sociological perspective and emphasize his theoretical contributions. This volume covers topics such as the meaning of race, race relations, international relations, economics, labor, politics, religion, crime, gender, and education.

The Social Theory of W. E. B. Du Bois offers an excellent introduction to the sociological theory of one of the 20th century's intellectual beacons. It is a dynamic text for undergraduate and graduate students studying sociological theory, African American studies, and race and ethnicity.

Phil Zuckerman
Introduction
Chapter I: On the Meaning of Race
1. "The Conservation of Races"
2. "Of Our Spiritual Strivings"
3. "The First Universal Races Congress"
4. "Does Race Antagonism Serve Any Good Purpose?"
5. "Africa and the Slave Trade"
6. "The Souls of White Folk"
7. "Social Equality and Racial Intermarriage"
8. "Should the Negro be Encouraged to Seek Cultural Equality?"
9. "The Concept of Race"
10. "The Negro and the Warsaw Ghetto"
Chapter II: On Race Relations
1. "Color Prejudice"
2. "Relations of Negroes to Whites in the South"
3. "The Negro Problem"
4. "Bleeding Ireland"
5. "The Shape of Fear"
6. "Segregation"
7. "Anti-Semitism"
8. "My Evolving Program for Negro Freedom"
9. "Bound by the Color Line"
Chapter III: On International Relations
1. "The Hands of Ethiopia"
2. "Colonies"
3. "The Trade in Men"
4. "Mexico and Us"
5. "The Future of Europe in Africa"
6. "Colonialism, Democracy, and Peace After the War"
8. "Prospect of a World Without Racial Conflict"
9. "The Disfranchised Colonies"
10. "Peace is Dangerous"
Chapter IV: On Labor, Economics, and Politics
1. "Servants"
2. "The Value of Agitation"
3. "Of the Ruling of Men"
4. "Of Giving Work"
5. "Business as Public Service"
6. "Employment"
7. "Economic Disenfranchisement"
8. "Marxism and the Negro Problem"
9. "The Use of Capital"
10. "The Release of Earl Browder"
11. "Human Rights for all Minorities"
12. "We Must Know the Truth"
13. "America's Pressing Problems"
14. "There Must Come a Vast Social Change in the US"
Chapter V: On Women
1. "The Black Mother"
2. "Woman Suffrage"
3. "The Damnation of Women"
4. "The Freedom of Womanhood"
Chapter VI: On Religion
1. "The Function of the Negro Church"
2. "Of the Faith of the Fathers"
3. "Immortality"
4. "Missions and Mandates"
Chapter VII: On Crime
1. "The Negro Criminal"
2. "The Relations of Negroes to Whites in the South"
3. "Notes on Negro Crime, Particularly in Georgia."
4. "Morals and Manners"
5. "Lynched by Years, 1885-1914"
Chapter VIII: On Education
1. "The Talented Tenth"
2. "Education"
3. "Education"
4. "The Negro College"
5. "The Freedom to Learn"
Index

"This is a useful collection insofar as it will help readers obtain an appreciation of the wide range of social concerns and problems that DuBois addressed during his long lifetime."

I have adopted this book as a supplemental textbook for a social theory course I am developing.

An excellent, well constructed text bringing to light the theories of an often forgotten theorist.