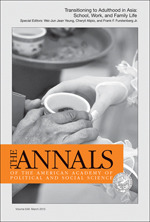 Share
Volume: 646
Series:
The ANNALS of the American Academy of Political and Social Science Series
Courses:
Sociology of Family
March 2013 | 250 pages | SAGE Publications, Inc
Download flyer
In the past decade or so, scholars in the United States have identified the emergence of a new, distinct stage of life, as adolescence has become protracted, and most young people of recent generations take longer to achieve economic and psychological autonomy than they did a half century ago.  This new life stage, in between adolescence and adulthood when young people are in a semiautonomous state, has come to be known as "early adulthood."  Main characteristics of this new life stage include a later entry into the work force, a longer period of time living in the natal home, and a delayed age at marriage and childbearing.  These trends not only have profound implications for young adults' well-being and intergenerational relationships but also challenge social institutions, such as family, schools, labor markets, and many youth-serving institutions.
Wei-Jun Jean Yeung and Cheryll Alipio
Transitioning to Adulthood in Asia: School, Work, and Family Life
Frank F. Furstenberg Jr.
Transitions to Adulthood: What We Can Learn from the West?
Quamrun Nahar, Peter Xenos, and Jeofrey Abalos
The Changing Transitions to Adulthood across Southeast Asia: A Census Approach to Cross-National Comparisons
Lang-Wen Wendy Huang
The Transition Tempo and Life Course Orientation of Young Adults in Taiwan
Hiroshi Ishida
The Transition to Adulthood among Japanese Youths: Understanding Courtship in Japan
Setsuya Fukuda
The Changing Role of Women’s Earnings in Marriage Formation in Japan
Hyunjoon Park
The Transition to Adulthood among Korean Youths: Transition Markers in Productive and Reproductive Spheres
Wei-Jun Jean Yeung and Shu Hu
Coming of Age in Times of Change: The Transition to Adulthood in China
Qianhan Lin
Lost in Transformation? The Employment Trajectories of China’s Cultural Revolution Cohort
Yingchun Ji
Negotiating Marriage and Schooling: Nepalese Women’s Transition to Adulthood
Cheryll Alipio
Young Men in the Philippines: Mapping the Costs and Debts of Work, Marriage, and Family Life
Suzanne Naafs
Youth, Gender, and the Workplace: Shifting Opportunities and Aspirations in an Indonesian Industrial Town