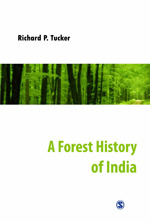 Share
Courses:
Physical Geography/Environmental Science
November 2011 | 267 pages | SAGE Publications Pvt. Ltd
Download flyer
This collection of articles by noted environmental historian Richard P. Tucker is an attempt to trace Indian forest history from the colonial era to its post-Independence legacy. It is a study of the evolution of forest policy at the national level, in counterpoint with management at the provincial and local levels, primarily in the Himalayan districts.

The book highlights the two main strains of conflict that characterize the evolution of professional forestry in India. First, the tension between the subsistence needs of the local population and the commercial needs of the colonial state, and second, the clash between the forest department, which sought to preserve and manage forests, and the revenue department, which was driven by the need to expand agriculture and industry.

Written mostly in the 1980s and 1990s, these articles were among the first environmental history studies in India and contribute significantly to the understanding of the colonial legacy for post-Independence management of India's natural resources.

Introduction
Forest Management and Imperial Politics: Thana District, Bombay, 1823-1887
The Forests of the Western Himalayas: The Legacy of British Colonial Administration
The British Colonial System and the Forests of the Western Himalayas, 1815-1914
The Historical Context of Social Forestry in the Kumaon Himalayas
The Evolution of Transhumant Grazing in the Punjab Himalaya
The British Empire and India's Forest Resources: The Timberlands of Assam and Kumaon, 1914-1950
The Depletion of India's Forests under British Imperialism: Planters, Foresters and Peasants in Assam and Kerala
The Commercial Timber Economy under Two Colonial Regimes in Asia
Resident Peoples and Wildlife Reserves in India: The Prehistory of a Strategy
Non-timber Forest Products Policy in the Western Himalayas under British Rule
Index

A wide-ranging and valuable collection of essays from a pioneering historian of tropical forestry.

[The book] deepens our understanding of India’s environment history within the broader analytical and global contest…The book is a useful reference for scholars of environment history in India as a compilation of a set of the author’s main publications from the region.