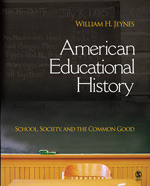 "This is an excellent text in the field of U.S. educational history. The author does a great job of linking past events to the current trends and debates in education. I am quite enthusiastic about this book. It is well-written, interesting, accessible, quite balanced in perspective, and comprehensive. It includes sections and details, that I found fascinating – and I think students will too."

"This book offers a comprehensive and fair account of an American Educational History. The breadth and depth of material presented are vast and compelling."

An up-to-date, contemporary examination of historical trends that have helped shape schools and education in the United States…

"This book is riveting and a must-read for those interested in understanding how and why the American education system developed as it did. One of the major strengths of this book is the way it nests the development of the American educational system into the larger history of the United States and the world. Moreover, Jeynes adeptly addresses the ideological, economic, racial, moral, spiritual, political, and democratic impulses fueling the development of the educational system and how changes in education have impacted our society.Jeynes uses rich detail and insightful analysis to draw the reader in, providing vignettes to highlight significant people, ideas, or events.
Jeynes also carefully relates historical educational phenomena to current educational and societal issues. Finally, he includes thought-provoking questions interspersed throughout the text and at the end of each chapter to encourage reflection and discussion.We have much to learn from Jeynes’ fascinating and refreshing overview of the development of education inAmerica!"

Chapter 6 - The Widespread Growth Of The Common School & Higher Education

Chapter 14 - Educational Reform Under The Republicans and Democrats