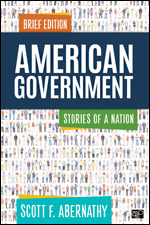 “The Brief edition of American Government: Stories of a Nation outlines the crucial areas and helps guide students along to what they should know… I am confident this approach is what students are looking for.”

American government is not just one story—it’s many stories. Our stories. And they are still being told.

In American Government: Stories of a Nation, author Scott Abernathy tunes in to the voices of America’s people, showing how diverse ideas throughout our nation’s history have shaped our political institutions, our identities, the way we participate and behave, the laws we live by, and the challenges we face. His storytelling approach brings the core concepts of government to life, making them meaningful and memorable, and allowing all students to see themselves reflected in the pages. For the new Brief Edition, Abernathy has carefully condensed and updated the content from the Full version, giving your students the information they need--and the stories they relate to--in a more concise, value-oriented package. Curious how storytelling can boost learning in your classroom? Read a free whitepaper that explains the research.


Free Poster: What can you do with a Political Science degree?

Trending Topics Series
Help your students gain a deeper understanding of some of today’s most evocative political topics—FREE when bundled!
Browse the latest topics

Looking for the AP® Edition? Learn more about the brief text specifically tailored for the new AP® framework and exam.
Preface
Acknowledgments
About the Author
PART I: FOUNDATIONS
1. American Political Stories: Claiming Rights, Demanding to Be Heard
American Students Claim Their Rights
American Political Culture Is Built on a Set of Shared Ideas
Politics and Political Action Set the Stage for Revolution
The Structure of Institutions Affects How Citizens Participate
Conclusion: The American Experiment, Continued, and You Are Part of It
Chapter Review
2. The Constitution of the United States: A New Vision of Representative Government
James Madison Plans for a Republic That Will Last
The Confederal System Made Coordination between the States Difficult
Delegates Reach a Compromise at the Constitutional Convention
Delegates Worked Out Details of the New Government
Federalists and Anti-Federalists Fought over Ratification
Conclusion: The Motives of the Framers and the Effects of the Constitution Are Still Being Debated
Chapter Review
3. Federalism: The Changing Boundaries between the Nation and the States
The Fight for Access to Medical Marijuana Reveals Tensions between State and Federal Law
The Constitution Divides Power between the Nation and the States
The American Federal System Has Developed over Time
Modern American Federalism Remains Cooperative but Faces Challenges
Conclusion: The Evolution of American Federalism Continues
Chapter Review
4. Civil Liberties and Civil Rights: Building and Defending Fences
Americans Defend Their Right to Marriage Equality in a Test of Civil Liberties
Civil Liberties Limit Government Intrustion
The First Amendment Protects Religious Freedom
The First Amendment Protects Free Expression of Political Beliefs
The Second Amendment Today Applies to Personal Possession of Firearms
Criminal Rights Are Secured through Procedural Justice
The Ninth and Tenth Amendments Set Limits to Federal Power
Civil Rights Secure Americans’ Equality under Law
Securing Civil Rights for American Women
Conclusion: Fences Still under Construction
Chapter Review
PART II: POLITICAL BEHAVIOR AND MASS POLITICS
5. Public Opinion: How Are Americans’ Voices Measured, and Do They Matter?
Public Opinion May Be Moved by Important Events Like Ferguson
Public Opinion Is the Sum Total of Individual Beliefs and Attitudes
Public Opinion Is Transmitted and Measured in Several Ways
Political Attitudes Come from a Variety of Sources
Ferguson and the Effects of Public Opinion on Democratic Representation
Conclusion: The Meanings of Public Opinion
Chapter Review
6. The Media: Truth, Power, and American Democracy
A Foreign Government’s Efforts to Influence an Election through the Media Raises Questions about the Media’s Power
The Evolution of American Media Shows That Issues of Power and Trustworthiness Are Not New
Questions of Bias Challenge Americans’ Trust in the Media’s Objectivity
Media Ownership and Content Are Subject to Regulation
The Power of the Media to Affect the Public Is Tested
Conclusion: Navigating the News
Chapter Review
7. Parties, Elections, and Participation: The Insurgents versus the Establishment
Bernie Sanders and Donald Trump Shake Up the Field . . . and Conventional Wisdom about the Power of Parties
Parties Organize, Signal, and Promote Policy Agendas
American Political Parties Undergo Cycles of Change
Elections and Campaigns Have Many Moving Parts
Presidential and Congressional Elections: The Same but Different
Political Participation Takes Many Forms
Conclusion: The Fallout
Chapter Review
8. Interest Groups and Social Movements: Collective Action, Power, and Representation
A Housing Bubble Bursts . . . and Interest Groups Pop Out
Americans Face Challenges in Acting Collectively in a Representative Democracy
Occupy Wall Street Illustrates the Struggles, Successes, and Failures of Social Movements
Conclusion: Organizing for Change or to Prevent Change
Chapter Review
PART III: INSTITUTIONS
9. Congress: Representation, Organization, and Legislation
The Experience of Women in Congress Raises Issues of Representation
The Constitution Defines Congress’s Shape and Powers
Getting to Congress Involves Personal, Professional, Electoral, and Financial Factors
Congress Is Organized around Formal and Informal Rules
The Legislative Process Is Complex by Design
Members Represent Constitutents by How They Act and Who They Are
Conclusion: The Complexity of Representation
Chapter Review
10. The American Presidency: Individuals, Institutions, and Executive Power
The Killing of an American Citizen Tests the Limits of Presidential Powers
The Constitution Outlines the Powers of the American Presidency
The Powers of the Presidency Have Evolved over Time
Institutions and Other Informal Sources of Power Shape the Modern Executive Branch
Conclusion: The Paradox of Power
Chapter Review
11. The Federal Bureaucracy: Putting the Nation’s Laws into Effect
Hurricane Katrina Tests the Federal Bureaucracy
Theories of Bureaucratic Organization Focus on Rules, People, and Tasks
The Bureaucracy Has Developed in Response to Demands and Crises
A Functioning Bureaucracy Depends upon Effective Organization
The Bureaucracy Is Constrained by Oversight and Reform
Conclusion: Another Devastating Hurricane, Another Federal Response
Chapter Review
12. The Federal Judiciary: Politics, Power, and the “Least Dangerous” Branch
The “Trial” of Sonia Sotomayor Highlights the Complexity of Judicial Decision Making
The Constitution Casts the Judiciary as the Weakest Branch
The “Trial” of John Marshall Established the Principle of Judicial Review
The American Legal System Is Defined by Federalism
Judicial Review Raises Questions of Constitutional Interpretation and Judicial Decision Making
Conclusion: The “Trials” of Merrick Garland and Neil Gorsuch
Chapter Review
PART IV: POLICY
13. Public Policy: Promoting the General Welfare and Advancing Americans’ Interests
American Dreamers’ Futures Depend upon Whether a Policy Will Continue
Domestic Social Policies Safeguard Americans’ Welfare
Economic Policy Protects Americans’ Financial Prospects
Foreign Policy Advances Americans’ Interests Abroad
From Syria to North Texas: From War and Chaos to the Pursuit of the American Dream
Conclusion: America in Progress
Chapter Review
Appendices
Declaration of Independence
Articles of Confederation
Constitution of the United States
Federalist No. 10
Federalist No. 51
Political Party Affiliations in Congress and the Presidency, 1789–2017
Summary of Presidential Elections, 1789–2016
Glossary
Notes
Index

SAGE EDGE FOR STUDENTS enhances learning in an easy-to-use environment that offers:

SAGE COURSEPACKS FOR INSTRUCTORS makes it easy to import our quality content into your school’s LMS. Intuitive and simple to use, it allows you to

For use in: Blackboard, Canvas, Brightspace by Desire2Learn (D2L), and Moodle

Don’t use an LMS platform? No problem, you can still access many of the online resources for your text via SAGE edge .

“The Brief edition of American Government: Stories of a Nation outlines the crucial areas and helps guide students along to what they should know… I am confident this approach is what students are looking for.”

“Abernathy’s text distinguishes itself through the combination of historical references and contemporary examples.”

“One of the most readable texts I’ve read; good for non-majors who aren’t interested in tons of theory, but don’t want to be talked down to.”

“Well written and timely… The stories feel natural, not strained or forced.”

Chapter 7: Parties, Elections, and Participation: The Insurgents versus the Esta