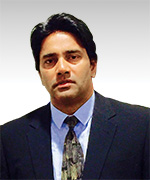 Ashok Sharma is currently a Visiting Fellow at the University of New South Wales (UNSW), Canberra, at the Australian Defence Force Academy (ADFA). Dr Sharma is also an Adjunct Associate Professor at the Institute of Governance and Policy Analysis at the University of Canberra. He is the Head of the South Asia Strategic, Security and State Fragile Program and Conjoint Head of the Indo-Pacific and Major Power Studies Program at the National Asian Studies Centre at the University of Canberra. He is also a Deputy Chair at New Zealand Institute of International Affairs, Auckland.

Dr Sharma has a BA (Hons) in Political Science from Ramjas College, University of Delhi, an MA in Political Science and an MPhil and PhD in American Studies from Jawaharlal Nehru University, New Delhi. He was a Faculty at the University of Delhi and worked with think tanks based in New Delhi, namely Brookings Project at the Observer Research Foundation, Centre for Air Power Studies and Centre for Land Warfare Studies.

Dr Sharma specializes in great power politics with emphasis on US–India–China geopolitics. He is extensively published and is the author of well-received book Indian Lobbying and its Influence in US Decision Making: Post-Cold War (SAGE Publications, 2017).