Dr. Moore is sought after for her expertise on the subject of women’s military service and has received several awards and honors from various organizations and scholarly institutions. She teaches and has taught numerous courses and seminars on Armed Forces and Society, Social Reform Movements, Race and Ethnic Relations, and Social Stratification. She has served on many PH. D. and M. A. research committees and directed over 150 Independent studies. She serves on the American Sociological Association Committee on Peace, War, and Social Conflict. She is also on the Board of Directors of the Inter-University Seminar on Armed Forces and Society. She serves on the Editorial Board of Armed Forces and Society.

She is author of the books: To Serve My Country, To Serve My Race: The Story of the Only African American WACs Stationed Overseas during World War II (NYU Press, 1996); and Serving Our Country: Japanese Women in the Military During World War II (Rutgers University Press, 2003); as well as a number of scholarly papers on the topics of gender, social inequality, race and ethnicity, and stratification in military organizations. 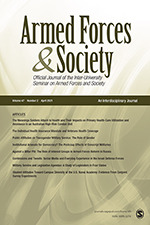