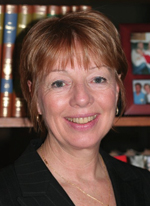 Carol Corbett Burris has served as principal of South Side High School in New York's Rockville Centre School District since 2000. Prior to becoming a principal, she was a teacher at both the middle and high school level. She received her doctorate from Teachers College, Columbia University, and her dissertation, which studied her district’s detracking reform in math, received the 2003 National Association of Secondary Schools’ Principals Middle Level Dissertation of the Year Award. In 2010, she was named The New York State Outstanding Educator by School Administrators Association of New York State.

She is the co-author, with Delia Garrity, of Detracking for Excellence and Equity. Articles that she has authored or co-authored have appeared in Educational Leadership, The Kappan, the American Educational Research Journal, The Teachers College Record, Theory into Practice, The School Administrator, the American School Board Journal and EdWeek. A chapter on closing the achievement gap, which she co-authored with Kevin Welner, appeared in Lessons in Integration: Realizing the Promise of Racial Diversity in America's Schools, a volume edited by the Harvard Civil Rights Project.