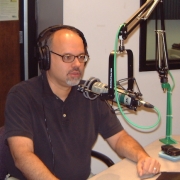 DAVID D. PERLMUTTER is Director of the School of Journalism and Mass Communication and a Professor at The University of Iowa. He received his BA ('85) and MA ('91) from the University of Pennsylvania and his Ph.D. ('96) from the University of Minnesota. He served as a Board member of the American Association of Political Consultants and now sits on the National Law Enforcement Museum Advisory Committee for its Media Exhibit. He is a graduate of the Association of Schools of Journalism and Mass Communication Leadership Workshop. At Iowa, in addition to his research, teaching, and administrative duties, he served on the Provost's Strategic Global Initiatives Council, the Advisory Council for the Office of the Vice President for Strategic Communication, the campus Fulbright Committee, and is an International Programs Faculty Fellow as well as a Starch Faculty Fellow in the College of Liberal & Sciences. Locally he also is a member of the U.S. Army Iowa City Community Partnership Council, the Board of Directors for the Iowa Center for Public Affairs Journalism (IowaWatch.org) and the Iowa Newspaper Federation Next Generation Task Force. At the University of Kansas he served as Associate Dean for Graduate Studies and Research and as a member of the University Press of Kansas Editorial Board Committee and graduated from the Senior Administrative Fellows Program. At Louisiana State University he served as interim Associate Dean for Graduate Studies and Research, led the political communication track, and won two faculty awards including the main campus-wide award for research, teaching, and service. A documentary photographer, he is the author or editor of nine books on political communication and persuasion including: Photojournalism and Foreign Policy: Framing Icons of Outrage in International Crises (Praeger, 1998); Visions of War: Picturing Warfare from the Stone Age to the Cyberage (St. Martin's, 1999); (ed.) The Manship School Guide to Political Communication (LSU Press, 1999); Policing the Media: Street Cops and Public Perceptions of Law Enforcement (Sage, 2000); Picturing China in the American Press: The Visual Portrayal of Sino-American Relations in Time Magazine, 1949-1973 (Rowman & Littlefield, 2007); (ed., with John Hamilton) From Pigeons to News Portals: Foreign Reporting and the Challenge of New Technology (LSU Press, 2007); Blogwars: The New Political Battleground (Oxford, 2008); (ed., with Robert Mann) Political Communication (LSU Press, 2011); and (ed., with Thomas J. Johnson), New Media, Campaigning and the 2008 Facebook Election (Routledge, 2011). He has written several dozen research articles for academic journals as well as more than 200 essays for U.S. and international newspapers and magazines such as Campaigns & Elections, Christian Science Monitor, Editor & Publisher, Los Angeles Times, MSNBC.com., Philadelphia Inquirer, and USA Today. He writes a regular column, "Career Confidential," for the Chronicle of Higher Education and blogs for CHE's "The Conversation." In fall 2010, Harvard University Press published his book Promotion & Tenure Confidential: The People, Politics and Philosophy of Career Advancement in Academia. In 2010 he was elected to the Association for Education in Journalism & Mass Communication Standing Committee on Research. In August 2011, he began a three-year term on the AEJMC Finance Committee. Perlmutter has been interviewed by most major news networks and newspapers, from the New York Times to CNN, ABC, and The Daily Show. He regularly speaks at industry, academic, and government meetings and runs workshops on personal and institutional branding via social media and on promotion and tenure in academia.
Policing the Media