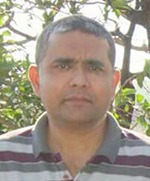 Fazzur Rahman Siddiqui is a research fellow at the Indian Council of World Affairs (ICWA), New Delhi. He received his PhD from the School of International Studies, Jawaharlal Nehru University, New Delhi, where his dissertation was focused on Islamic Political Movements in West Asia and South Asia. His research expertise includes Islamic undercurrents in West Asian Politics and dynamics of development and modernization in the Arab World. His knowledge of the West Asian region is grounded in linguistic and Islamic perspectives, with particular attention to the historical evolution of the region. He is proficient in Arabic, Urdu and Persian in addition to being fluent in English and Hindi. He is the author of The Concept of Islamic State: From the Time of Caliphate to Twentieth Century: Pre-Ikhwan and Post Ikhwan Phase, published in Lebanon. He has presented papers in national and international conferences in India and abroad and contributed chapters in edited books. Before joining the ICWA, he was associated with the Ford Foundation.
Political Islam and the Arab Uprising