Helene Sjursen has been at ARENA since 1997. She has previousy worked as a lecturer in politics at the University of Glasgow and the University College Dublin. She holds a Ph.D. in international relations from London School of Economics and Political Science (LSE). Sjursen was Visiting Research Fellow at the European Institute, London School of Economics and Political Science (LSE) in the lent and summer term of 2006. She was also a Nordic Visting Fellow at the International Relations Department at LSE in 1999.
Contemporary European Foreign Policy 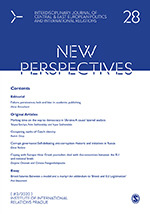