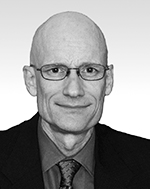 Kurt Taylor Gaubatz, PhD, is an associate professor in the Graduate Program in International Studies at Old Dominion University. In addition to courses in international relations and international law, he regularly teaches research methods and advanced statistics. He has previously taught methodology and formal modeling as a faculty member at Stanford University and at Oxford University (Nuffield College), where he was the visiting John G. Winant Lecturer in American Foreign Policy. He has also served as the Susan Luise Dyer Peace Fellow at the Hoover Institution at Stanford University, and received a Pew Faculty Fellowship from the Kennedy School of Government at Harvard University.

Professor Gaubatz’s most recent book is A Survivor’s Guide to R (SAGE 2015), which is a broad and cross-disciplinary introduction to the R language for statistical programming. He is also the author of Elections and War (Stanford University Press, 1999), which is a study of the electoral politics of military conflict. His work on international law and on the relationship between domestic politics and international relations has appeared in a number of leading journals. His work on political modeling has received funding from the US Department of Defense.

Professor Gaubatz earned an AB in economics from U.C. Berkeley, an MALD in international law from the Fletcher School of Law and Diplomacy, an MDiv in theology from Princeton Theological Seminary, and a PhD in political science from Stanford University. More information can be found at kktg.net/kurt.

Quantifying the Qualitative
A Survivor's Guide to R