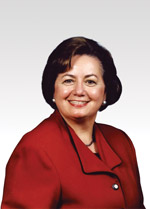 Maria G. Ott, Ph.D. started a new phase in her distinguished educational career when she joined the USC Rossier School of Education in October 2012.  Maria G. Ott  served more than seven years as Superintendent of the Rowland Unified School District, leading the district through major instructional improvement initiatives and modernization of facilities.   She is nationally known for establishing partnerships with private foundations in support of Rowland Unified and its strategic plan and efforts to reach high levels of literacy and raise student achievement, placing Rowland Unified on the national stage and forefront of educational transformation movements.  Rowland Unified serves the cities of La Puente, Walnut, West Covina, City of Industry, unincorporated Valinda and unincorporated Rowland Heights. Dr. Ott was selected as Superintendent in July 2005, following a national search. Prior to joining Rowland Unified, Dr. Ott served five years as the Senior Deputy Superintendent in the Los Angeles Unified School District (LAUSD), second in authority to Superintendent Roy Romer, former three-term Governor of Colorado.

At USC, Maria G. Ott, Ph.D. serves as Executive in Residence, teaching graduate level courses and participating in Rossier School of Education initiatives.  In her role at USC, Dr. Ott will draw upon her extensive experience as an educator in urban and suburban districts, including her work on cultural proficiency as detailed in her recently released book, A Culturally Proficient Society Begins in School:  Leadership for Equity, with co-authors Carmella S. Franco and Darline P. Robles.  Dr. Ott has presented to national audiences on the topic of her book and continues to contribute to the educational literature about the importance of cultural proficiency in closing achievement gaps.

Dr. Ott represents the Rossier School of Education as a member of the Greater Crenshaw Education Partnership Board (GCEP), serving as Vice-Chairperson.  In this role, Dr. Ott will assist the GCEP Board in fulfilling the partnership agreement in support of goals established for Crenshaw High School.  The GCEP partnership brings together USC, the Los Angeles Urban League, and the Bradley Foundation to address reform efforts designed to improve student academic achievement.  As an experienced Superintendent, Dr. Ott brings extensive experience to her Board responsibilities.

Dr. Ott was recruited to serve as the educational deputy to Superintendent Romer in 2000. Dr. Ott returned to LAUSD after seven years as the Superintendent of the Little Lake City School District, serving the cities of Santa Fe Springs, Norwalk and southeastern Downey.  During her tenure, she was known for her accomplishments in improving student achievement, utilizing strategic planning to align resources to district priorities, and achieving excellence in governance with her Board.  Selected as a member of the prestigious Annenberg Superintendents’ group, she led a major reform initiative in Little Lake as a recipient of an Annenberg grant.  She is highly regarded throughout the state’s educational community for her strong leadership, her commitment to public education and her proven results working with children from diverse and multi-ethnic backgrounds.

Maria G. Ott earned her Bachelor’s and Master’s degrees at Mount St. Mary’s College and completed her doctoral studies at the University of Southern California, majoring in Educational Policy, Planning and Administration.  Prior to her appointment as Superintendent of Little Lake, Maria Ott worked in the Los Angeles Unified School District as a teacher, principal, and central office administrator in the Office of Instruction.  Her accomplishments included improving student achievement as a principal, and national recognition for her leadership in improving educational outcomes and programs for English language learners.

Now What? Confronting Uncomfortable Truths About Inequity in Schools
A Culturally Proficient Society Begins in School