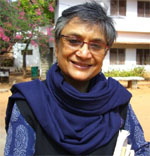 Meenakshi Thapan is Professor of sociology at the Delhi School of Economics and Co-ordinator of the D.S. Kothari Centre for Science, Ethics and Education at the University of Delhi. She was Co-ordinator of the European Study Centre Programme, University of Delhi (January 2010–March 2012) and country partner (India) for the EU FP7 Project on EuroBroadMap. She is Series Editor for the series on Women and Migration in Asia, Volumes 1–5 (SAGE 2005–2008) and editor of Vol. 1: Transnational Migration and the Politics of Identity (SAGE 2005). She has also published Life at School (1991, 2006), Living the Body (SAGE 2009) and edited Embodiment: Essays on Gender and Identity (1997), Anthropological Journeys (1998), Contested Spaces. Citizenship and Belonging in Contemporary Times (2010) and (with Roland Lardinois) Reading Pierre Bourdieu in a Dual Context. Essays from India and France (2006).