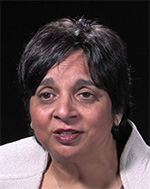 Reeta Chowdhari Tremblay is Professor of Comparative Politics and Global South in the Department of Political Science at the University of Victoria, Canada. She holds an MA and a PhD degree in Political Science from the University of Chicago, IL, USA. She also has an MPhil degree from Jawaharlal Nehru University, India, and an MA and a BA degree from the University of Kashmir, India. Her major areas of research are identity-based politics and secessionist movements (Kashmir) in South Asia, the politics of subaltern resistance and accommodation in post-colonial societies, democracy and governance, and comparative federalism. During her career, she has held several administrative positions, including Vice-President Academic and Provost at the University of Victoria, Canada; Vice-President (Academic) and Pro Vice-Chancellor (Pro Tem) at Memorial University of Newfoundland, Canada; Dean of the Faculty of Arts at Memorial University; and, Chair, Department of Political Science at Concordia University, Montreal. She is the Past President of the Canadian Political Science Association (CPSA), Canadian Asian Studies Association (CASA) and the Canadian Council of Area Studies of Learned Societies (including CASA, Latin American Studies, African Studies and the Middle Eastern Studies). She has also served or is serving on editorial boards of several disciplinary journals, including PS: Political Science & Politics (APSA), Pacific Affairs, Canadian Journal of Law and Society, and Politics and Governance. She has authored or co-authored six books, including State Autonomy and Public Policy in India; Human Rights: Global and Canadian Perspectives and Mapping the Political Landscape. Some of her recent essays include ‘Contested Governance, Competing Nationalisms, and Disenchanted Publics: Kashmir Beyond Intractability?’, ‘Kashmir’s Contentious Politics: The More Things Change, the More They Stay the Same’ and ‘Labor Migration, Citizenship, and Social Welfare in China and India’. Her work is widely reviewed and cited—in particular her writings on Kashmir and India–Pakistan relations, a subject on which she is widely considered to be the leading North American expert. She has been recognized for her exceptional teaching at both the graduate and undergraduate levels and has received the Concordia University Alumni Association Award for Excellence in Teaching in 2002. She also regularly contributes commentaries on South Asia, in particular on Kashmir and on South Asian regional politics to South Asia Monitor (projects of the New Delhi-based think tank, Society for Policy Studies). In 2015, she was recognized as one of the top 40 prominent Indo-Canadians and was profiled in The Indian Diaspora’ A-List.