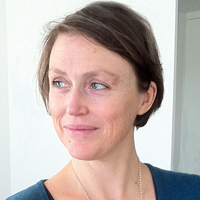 Rosamund Davies has a background in professional practice in the film and television industries, in which she worked with both independent production companies and public funding bodies. As script editor and story consultant for Film London, she oversaw the development of around 100 projects.

Rosamund has been a lecturer in creative and media writing at the University of Greenwich since 2001, founding and expanding the university's screenwriting provision. She also developed the Working in the Media and Creative Industries course, which became the basis for the book Introducing the Creative Industries: From Theory to Practice (SAGE, 2012), which she co-authored with colleague Gauti Sigthorsson.

In her recent media practice, Rosamund has explored the intersection between narrative and archive as cultural forms and transmedia storytelling approaches to dramatic narrative. As co-investigator on the interdisciplinary research project PATINA (Personal Architectonics Through Interaction with Artefacts), funded by the RCUK Digital Economy programme, Rosamund has brought narrative enquiry to the context of designing effective research spaces, collaborating with colleagues in computer science, human computer interaction, archeology and architecture at the universities of Southampton, Bristol, Brighton, Newcastle and Swansea. She is currently collaborating on further interdisciplinary research projects with colleagues from computer science and archeology at the University of Southampton and Kings College London.