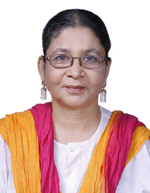 She was a Scholar-in-Residence, for the teaching year 2008–2009, under the Fulbright programme at the University of South Carolina, USA, where she taught among other courses, one on Ethnicity and Race. She is also the Chair of the Commission on the Anthropology of Women, an international body and part of the International Union of Anthropological and Ethnological Sciences (IUAES). She was earlier Co-Chair along with Professor Faye Harrison (Chair) up to 2009.

Life as a Dalit