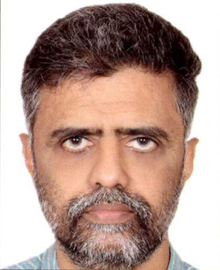 V. Santhakumar is currently Professor, Azim Premji University, Bangalore. He had been a faculty, for 15 years (1996–2011), and is currently a Visiting Professor at the Centre for Development Studies, Trivandrum. He worked as a full-time volunteer in a major non-governmental organisation called Kerala Sasthra Sahithya Parishad. He completed doctoral research from the Indian Institute of Technology, Madras. He has held postdoctoral scholarships at the Wageningen Agricultural University, Netherlands, and Vanderbilt University, United States.

V. Santhakumar has also carried out a number of consultant assignments for the Asian Development Bank, United Nations Environment Programme and United Nations Development Programme in different states of India, and in Tajikistan, Palestine, Laos and so on. He has received the research medal and the outstanding research award of the Global Development Network, during its initial years. He specialises in institutional issues of environment, natural resources, energy and infrastructure. In addition to publishing in international journals, he has authored Analysing Social Opposition to Reforms (2008), Economic Analysis of Institutions: A Practical Guide (2011) and Economics in Action: An Easy Guide for Development Practitioners (2013)—all published by SAGE India. He has also co-edited the two-volume series on Law and Economics (2013) published by SAGE India.