Prior to his move to Teachers College, Dr. Burke was professor of management and chair of the Department of Management at Clark University.  Prior to the Clark assignment, Dr. Burke was an independent consultant from 1974 to 1976.  For eight years he was a full-time professional with the NTL Institute for Applied Behavioral Science, where he was director for Executive Programs and director of the Center for Systems Development (1966-1974).  For eight years beginning in 1967 he also served as the executive director of the Organization Development Network

Dr. Burke is a Fellow of the Academy of Management, the Association for Psychological Science, and the Society for Industrial and Organizational Psychology. He has served on the Board of Governors of the Academy of Management and the American Society for Training and Development, and he is a Diplomate in organizational and business consulting psychology, American Board of Professional Psychology. From 1979 to 1985 he was editor of Organizational Dynamics, and from 1986 to 1989 he started and served as editor of the Academy of Management Executive. Dr. Burke is the author of more than 150 articles and book chapters on organization development, training, change and organizational psychology, and conference planning; and author, co-author, editor, and co-editor of 19 books.  His latest book published by Sage is Organization Change: Theory and Practice, 4th Ed.  He designed and served as faculty director of the Columbia Business School executive program "Leading and Managing People" from 1988 to 1995. In 1989 he received the Public Service Medal from the National Aeronautics and Space Administration, in 1990 the Distinguished Contribution to Human Resource Development Award and in 1993 the Organization Development Professional Practice Area Award for Excellence - The Lippitt Memorial Award - from the American Society for Training and Development. Dr. Burke has also served on three committees for the National Research Council of the National Academy of Sciences (1994-2012). August of 2003 he received the Distinguished Scholar-Practitioner Award from the Academy of Management, and in October of 2003, he was the recipient of the Organization Development Network’s Lifetime Achievement Award. In 2004 he was appointed Distinguished Scholar-in-Residence for the Management Consulting Division of the Academy of Management, and in 2005 and 2010 he received the Linkage Corporation’s Lifetime Achievement Award for leadership in the field of organization development. Also in 2005, he became the co-director of the Eisenhower Leadership Development Program, an MA in organizational psychology joint program between Teachers College and the United States Military Academy at West Point. Also in collaboration with the U.S. Army War College, Dr. Burke is responsible for a one-year fellowship program for U.S. Army Colonels. In April, 2007, he received the Distinguised Lifetime Contribution to Practice Award from the Society for Industrial and Organizational Psychology, and in 2011 the Lifetime Achievement Award from the Best Practice Institute. His most recent book is the 3rd edition of

Organization Development: A Process of Learning and Changing (2015; Pearson Education) now co-authored with Debra Noumair.  On May 19, 2016, Dr.Burke was given The Outstanding Civilian Service Medal Award from the Department of the Army for his work with the United States Military Academy at West Point. 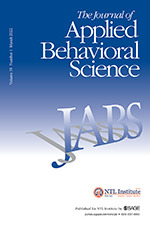