Book > Academic Books > Economics & Development Studies
SAGE online ordering services will be unavailable due to system maintenance on August 12th at 18:00 pm Pacific / 21:00 pm Eastern time. Thank you for your patience and we apologize for the inconvenience. 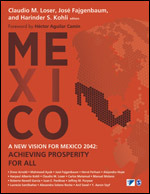 Share
November 2012 | 352 pages | SAGE India
Download flyer
Mexico is at a critical juncture. The next administration will assume power at a particularly crucial time in Mexico's economic and social development. Its priorities and actions will have a decisive impact on the country's long-term economic, social, and even, political trajectory. If the political paralysis that has prevented the last two administrations from tackling Mexico's fundamental economic problems continues for another six years, the country may slide from its current low-growth equilibrium into a vicious cycle of economic stagnation, and subsequently dash the peoples' hopes, further erode the government's credibility, and worsen the law and order situation. By contrast, if the new administration embraces a well-balanced reform agenda and adopts a package of bold initiatives early in its term, it could once again unleash Mexico's vast potential and build the foundations of a more prosperous, safer and dynamic society.

A New Vision for Mexico 2042 identifies the priority issues that could influence Mexico's long-term economic trajectory, and outlines a balanced action program necessary to effectively address these issues. It includes reforms and actions that would simultaneously achieve much higher and more inclusive growth, and thus would restore the sense of pride and optimism among Mexicans that has been eroding in recent years. The issues discussed are ofsuch importance that the legacy of the next Presidency could well be determined by the administration's willingness and ability to implement the agenda outlined in this book.