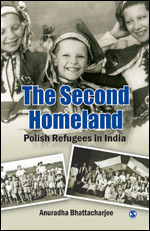 Share
December 2012 | 375 pages | SAGE India
Download flyer
The Second World War presents the backdrop for this riveting account of displacement, migration and resettlement. Once the Soviet forces marched into Poland, thousands of Polish citizens were deported to slave-labor camps in the USSR. As news of their inhuman condition and ordeal spread, Jam Saheb Digvijaysinghji of Nawanagar, a Princely State in British India, opened the doors of his state and welcomed the orphaned Polish children. The Second Homeland chronicles the passage and sojourn of these young refugees.

Readers will get an authentic account of their tribulations through the first-person account of a young Polish orphan's hair-raising journey to India and his experiences during the stay. The book includes a historical perspective culled out from archival documents in India, the UK and Poland.

This is a unique mix of a diary, oral history and historical viewpoint placed adjacent to a compilation of archival personal photographs. The book beautifully brings out a little-known aspect of European exiles in India during the Second World War.
Foreword
Anil Wadhwa
Introduction: A Brief Historical Background
ARRIVAL
Franek's Odyssey
Arrival in India
INDIA YEARS
Franek and Tadek in Balachadi
Home for the Next Few Years
The Transit Camps and War-duration Domicile
Franek in Valivade
A Polish Village on an Indian Riverbank
REMINISCENCES AND REFLECTIONS
Franek's Epilogue
Looking Back
Voices from the Past
Index
“Anuradha Bhattacharjee’s “The Second Homeland”  is an original and interesting contribution to transnational history. It is also a story of hope. Ms Bhattacharjee’s book demonstrates how a spirit of solidarity and fraternity existed, even during the darkest moments of history, and brought together people from distant parts of the world. The account of these Polish children who escaped from Europe to India  reminds the readers of how the history of humanity is intertwined and how important it is to share memory, across the world.  “The Second Homeland” is also an inspiration by showing how archives can be brought to life and tell stories at many different levels, from the political to the individual and everyday life experience. Thank you, Anuradha, for having done this amazing work!”
Jens BOEL
Chief Archivist, UNESCO
“The Second Homeland” by Anuradha Bhattacharjee chronicles the generosity of not just one, but several Maharajas of India and common people alike towards the Polish Children and adult who managed to reach India after their ordeals in the midst of World War II…[it] brings back the memories of a good deed done in the philosophy of “Vasudhaiva Kutumbakam” a traditional Indian Philiosophy.
Preneet Kaur
Ministry of State and External Affairs, Government of India
The extraordinary journey of the Polish refugees and the circumstances that allowed them to find homes in India are the subject of The Second Homeland, a recent book by Anuradha Bhattacharjee, a scholar at Jamia Millia Islamia University in New Delhi. “India, though not sovereign at the time and not at all prosperous, became the first country in the world to accept and offer war-duration at her own cost to the hapless Polish population rendered homeless and subsequently stateless,” she said. The publication of her book has prompted the Michigan reunion.
New York Times, 29 July 2013

A heartwarming story about orphaned children welcomed by a loving Maharaja…Anuradha Bhattacharjee has written a marvelous book, rich with detail from archival sources, oral history, and letters and memoirs of the time. The Second Homeland is a must read…It’s a fascinating, exciting, moving but virtually unknown story from World War II. Highly recommended!

The Second Homeland... [tells] with affection and sympathy and perhaps for the first time in such detail, the full story of these children….Bhattacharjee has put together various valuable documents and photographs which give a clear sense of what life in the Balachadi camp was for these children…..The children of Jamnagar finally found, it seems, the narrator they had been waiting for.

The book captures the years that the children spent in India before being either back to Poland, Africa, US, Australia or Canada at the end of the war. It also offers substantial historical background, pierced together from archives and personal accounts.

Mail Today
A vivid historical account...tells the tale of polish refugees who found a safe haven in the princely state of Jamnagar... the book has poignant first person narratives from survivors who underwent the ordeal. It is interlaced with pictures and rare documents that had survived their journey across continents...all in all the book is a riveting account of an event that had till now escaped the annals of history.
The Pioneer

A very well worked out research.... This book is a gem for the library of those who are interested in the study and research of displaced communities, European studies as well as those who keep a track of the history of arrival of different communities in India.

The Second Homeland is a must read…It’s a fascinating, exciting, moving but virtually unknown story from World War II. Highly recommended!