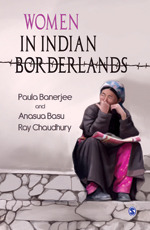 Women in Indian Borderlands is an ethnographic compilation on the complex interrelationship between gender and political borders in South Asia, particularly in the three major areas of West Bengal, Jammu and Kashmir and Northeast India. The book is an outcome of a research program on Globalization, Democracy, Citizenship, Gender, and Peace Studies.

The chapters in the book examine the stories of women whose lives are intertwined with borders, who are its markers and who resist everyday violence in all its myriad forms. The borders become zones, where the power and control of one state ends and the other begins. The result is the startling revelation that women not only live on the borders, but in many ways, they form them and are a crucial part of them.

The borders become symbolic of spaces where socio-economic and political contests of inclusion and exclusion are played out every day. The essays describe the way in which women negotiate their differences within a state, which in the guise of being democratic, denies space to differences based on ethnicity, religion, class, or gender.

The contributors indicate that borders become hostile zones of widespread aggression, where masculinity is privileged. They analyze how most of the traditional efforts made to make geopolitical regions more secure, are nothing but attempts to privilege a masculine definition of security that only results in feminine insecurities.

The volume is an interesting collage of selective borderlands and alerts us to the research vistas that need to be addressed in further studies.