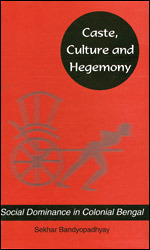 Share
June 2018 | 256 pages | SAGE India
Download flyer
It is widely believed that, because of its exceptional social development, the caste system in colonial Bengal differed considerably from the rest of India. Through a study of the complex interplay between caste, culture and power, this book convincingly demonstrates that Bengali Hindu society preserved the essentials of caste discrimination in colonial times, even while giving the outward appearance of having changed.

Using empirical data combined with an impressive array of secondary sources, Dr Bandyopadhyay delineates the manner in which Hindu caste society maintained its cultural hegemony and structural cohesion. This was primarily achieved by frustrating reformist endeavours, by co-opting the challenges of the dalit, and by marginalising dissidence. It was through such a process of constant negotiation in the realm of popular culture, argues the author, that this oppressive social structure and its hierarchical ideology and values have survived.

Starting with an examination of the relationship between caste and power, the book examines early cultural encounters between `high' Brahmanical tradition and the more egalitarian `popular' religious cults of the lower castes. It moves on to take a close look at the relationship between caste and gender showing the reasons why the reform movement for widow remarriage failed. It ends with an examination of the Hindu `partition' campaign, which appropriated dalit autonomous politics and made Hinduism the foundation of an emergent Indian national identity.

Sekhar Bandyopadhyay breaks with many of the assumptions of two important schools of thought - the Dumontian and the subaltern - and takes instead a more nuanced approach to show how high caste hegemony has been able to perpetuate itself. He thus takes up issues which go to the heart of contemporary problems in India's social and political fabric. This important and original contribution will be widely welcomed by historians, sociologists and political scientists.

Introduction: The Historiography of Caste in Bengal
Caste and Power
Competing Discourses in Colonial Bengal
Caste and Popular Religion
Revolt Against Hierarchy and Its Limits
Caste and Social Reform
The Case of Widow-Remarriage
Caste and Gender
Social Mobility and Status of Women
Caste and the Territorial Nation
Hindu Mahasabha, Partition and The Dalit
Conclusion
Index

The book is an experimental illustration of how one can use information which is available, obviously to the credit of the author’s insightful probing of the questions for which he seems to have answers for all. It makes one raise more questions and gives one ideas to begin the thought process. A “must read” book because of its interdisciplinary nature.