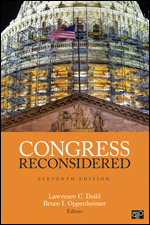 Share
Courses:
Congress | Introduction to American Government
December 2016 | 536 pages | CQ Press
Download flyer
For almost four decades, the editors of Congress Reconsidered, Lawrence C. Dodd and Bruce I. Oppenheimer have delivered the best contemporary work from leading congressional scholars in a form that is both analytical and accessible. The tradition continues in this Eleventh Edition as contributing authors focus on the many ways Congress has changed over time and examine the conditions that foster these developments.

“For seasoned congressional scholars and beginners alike, Congress Reconsidered once again offers essential insights that place the contemporary Congress in political context. This book effectively situates Congress at the nexus of virtually every major topic in American politics, from elections to campaign finance, inter-branch politics, partisanship, representation, and public policy-making. It is, in short, an indispensable resource for making sense of American politics in an era of political upheaval.”

“Congress Reconsidered is always relevant, as the authors shift the focus of each edition to include chapters that cover the latest emphases of scholarly research on the institution. This text has no equal when it comes to a set of articles that inform students about Congress, research on the topic, and challenges confronted by the legislative branch.”

“Congress Reconsidered is the best text of its kind. Every article and chapter in the book helps convey to students that Congress is more than just the group of people they see on TV. Students are often amazed at the breadth of scholarship on Congress and, through this book, come to understand how it is constrained and influenced by other institutions.”

“This edited volume is chock-full of thoughtful, empirically-minded essays by respected congressional scholars. It would be difficult to construct a text that is more effective than Dodd and Oppenheimer’s in offering such accessible but serious treatments of contemporary issues in the U.S. Congress.”