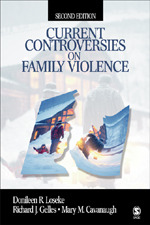 PRAISE FOR THE FIRST EDITION:

"These essays are exemplary in conceptualization, organization, and delivery. The messages are crystal clear, the readability superb. This book stands as a model of editorial excellence. The design of the volume is unique and responds well to a clear need in the subdiscipline of family violence, which remains fraught with diversity and dissention. . . . This piece of work is honest and effectively illuminates the growing pains of a very young and ideologically loaded subdiscipline that is anchored by an interdisciplinary and heterogeneous collection of smart people. Current Controversies on Family Violence is a powerful addition to the family violence literature. I recommend it as required reading for family violence courses. Gelles and Loseke are to be commended for their excellent idea, their tenacity, their directness and candor as expressed in the framing materials, their sensitive insights, and their superb editorial skills."

--JOURNAL OF MARRIAGE AND THE FAMILY

The study of family violence is surrounded by multiple controversies. Experts in this field do not agree about what should be studied and condemned (Is spanking violence? Is women's violence toward men a major social problem? If it is, how should it be measured? What, specifically, should be condemned as date rape?)  Experts also disagree about the causes of violence (Individual pathology? The structure of gender or families?), as well as about what should be done to eliminate it (Do child sexual abuse education programs or family preservation programs work?).  Now in its Second Edition, Current Controversies on Family Violence contains thoughtful--often heated--discussions that highlight the most current controversies, research, and policy directions in the family violence area. This volume includes chapters by academic and public policy researchers, therapists, lawyers, victim advocates and educators. Some of the controversies in the First Edition have been deleted while new ones have been added. Chapters in this Second Edition also are shorter and more accessible to readers who are not already experts in family violence.

This is an excellent and necessary resource for students and researchers of interpersonal violence, sociology, social work, nursing, gender studies, clinical psychology, criminal justice, and gerontology.

Chapter 1. Through a Psychological Lens: Personality Disorder and Spouse Assau

Chapter 3. Through a Sociological Lens: The Complexities of Family Violence

Chapter 5. Men's Violence Toward Women is the Serious Social Problem