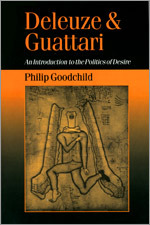 Share
Series:
Published in association with Theory, Culture & Society
December 1996 | 240 pages | SAGE Publications Ltd
Download flyer
Both accessible and definitive, Deleuze and Guattari provides a critical examination of the writing of two notoriously difficult thinkers. This important introduction is divided into three sections--knowledge, power, and desire--and provides a systematic account of the intellectual context as well as an exhaustive analysis of the key themes informing Deleuze and Guattari's work. Providing a framework for reading the important and influential study Capitalism and Schizophrenia, this volume is attentive to the needs of the student by providing a lexicon of the difficult ideas used in Deleuze and Guattari's discussion of philosophy, art, and politics. Deleuze and Guattari is an important addition to the critical literature on some of the most challenging work in recent social theory. It will be the standard introduction to Deleuze and Guattari for students of philosophy and social theory.
Introduction
Knowledge, Power, Desire
PART ONE: KNOWLEDGE
The Emergence of Desire
The Abstract Machine
Geophilosophy
PART TWO: POWER
Capitalism and Schizophrenia
Escaping Dominant Discourses
Against the Strata
PART THREE: LIBERATION OF DESIRE
The Revolution of Desire
The Liberation of Work
The Society of Desire

`Valuable ... it stays close to the text of Deleuze and Guattari and so invites the reader to pursue specific issues in the original. Philip Goodchild's scholarly apparatus is admirable and provides a reliable entry to the remarkable writings of two very exciting thinkers' - Horst Ruthrof, Social Semiotics

`Goodchild shows us the joy to be found in a careful and critical engagement with works of Deleuze and Guattari.... With this book Goodchild has announced himself as a major figure in the English-speaking reception of Deleuze and Guattari's thought' - Iain MacKenzie, The Queen's University of Belfast, may appear in Radical Philosophy.

`In this introduction Philip Goodchild has managed to pull off an almost impossible feat, making the work of Deleuze and Guattari accessible to a wider audience while at the same time remaining felicitous to the mobile and dynamic character of their innovations in thought. The result is a book of great intelligence and power which will not only introduce new readers to Deleuze and Guattari in novel and exciting ways, but which will also, I am confident, come to play a major role in the invention of their thought that is now underway and that will gain serious momentum in the next few years. Above all, Goodchild's introduction serves to show the incredible richness and immense power of the work of Deleuze and Guattari, a fertility and a potency which readily comes across when placed alongside the narcissism of postmodern thought and the sterility of so much academic philosophy. Goodchild's marvellous presentation of their work hits one in the face like a great wind, transporting one into completely new climates and strange environments, forcing one to construct new paradigms of thought and existence' - Keith Ansell Pearson, University of Warwick

`Lively and challenging....Goodchild's personal engagement with... [Deleuze and Guattari's] work is exceptional (and was first apparent in his contemplative and insightful Gilles Deleuze and the Question of Philosophy, 1996)' - Times Literary Supplement

Radical Conservatism and the Future of Politics

The Politics of Postmodernity