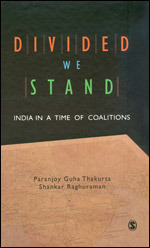 Share
Courses:
Political Institutions
February 2009 | 532 pages | SAGE Publications Pvt. Ltd
Download flyer
This topical and absorbing book, written by two eminent journalists, explains why India has entered a new era of coalition politics. It analyses the consequences and implications of this relatively recent phenomenon. India has come a long way from the time since the Congress dominated the country's polity. The authors argue that the multi-party structure of government, or a coalition government, is neither temporary nor an aberration. Coalitions are here to stay, at least in the foreseeable future. The authors dismiss the view that India's polity is essentially bipolar, that is, led by either of the two largest political parties - the Congress or the Bharatiya Janata Party. They do not accede to the contention that other political parties have no option but to align themselves with either the Congress or the Bharatiya Janata Party.

Continuing the analysis begun in their earlier work, India in a Time of Coalitions: Divided we Stand (Sage, 2004) both authors skilfully piece together the complex jigsaw of Indian politics. The authors point to the fragmentation of Indian polity with the rise of caste-based and regional parties and the formation of coalitions at the federal as well as provincial levels. This, they say, should not be perceived as a negative feature but as a positive influence on the working of the country's democratic structures. The authors take the view that coalition governments are in fact better equipped to deal with the tensions of India's deeply divided and highly hierarchical society. In comparison, governments dominated by single parties tend to both centralize and homogenize.

Among the issues the book analyzes are

" The sudden rise and fall of the BJP from the time it was almost wiped out in 1984, the party's faction-ridden character and its inability to quickly come to terms with its electoral defeat in 2004

" The growing importance and the changing tactics of the left parties, their internal differences and mainstreaming and their influence on the country's economic policies

" The extent to which political coalitions have led to better governance, brought about a greater degree of federalism and reduced the incidence of corruption

Challenging many commonly held views regarding India's political processes, this fascinating book will delight anyone interested in Indian politics at the beginning of the 21st century.

This is an encyclopaedic book with a gripping account of contemporary politics in India….the book is a pioneering effort for its distinct style, depth of analysis and open-ended inferences. The authors deserve to be complimented for presenting a complex subject in a serious and professional manner. It is a must-read for all those interested in the contemporary history of India.

The book is a racy read and all the events of the last few decades have been faithfully chronicled.

The book is not a dry academic treatise, but a very readable, informative account, which stands out for its blunt assessment of the leading personalities of the Indian political scene, particularly those who are currently at the helm of affairs.

This is an encyclopaedic book with a gripping account of contemporary politics of India. It is a comprehensive and objective analysis of political parties in pursuit of power and the games they play in that process. The book unfolds several myths about parties, policies, polls and delineates the undercurrents. No analysis of ongoing politics in India could claim ` definitive answers`. The authors restrain from such a trap. The book is a `SWAT` analysis of political parties and the India polity without going for voluminous empirical data....Overall, the book is a pioneering effort for its distinct style, depth of analysis and open-ended inferences. The authors deserve to be complimented for presenting a complex subject in a serious and professional manner. It is a must-read for all those interested in the contemporary history of India.

This is a remarkable book on the durability of coalition governments to which the Indian polity is destined for the next few decades, according to the authors who are both second- generation scholars and gifted journalists.

Dismissing the notion of bi-polarity, and resting the debate on whether coalition governments are at best a necessary evil or are better than single-party governments. Challenging many widely held views on the Indian political process, this book is a must read for anyone interested in contemporary Indian politics at the beginning of the 21st century.

The book helps one to understand the dynamics of tele-evangelism and explains why it is nothing but fundamentalism.