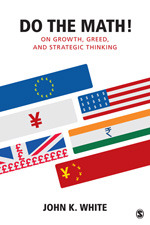 Our world has become more complicated, and the notion of growth at any cost has led to constant economic uncertainty, a permanently stressed-out workforce, and everyday stories of government and corporate abuse. Author John K. White argues that a better knowledge of basic systems is needed to understand the world we live in, from pyramid scams to government bailouts, from sports leagues to stock markets, from the everyday to the seemingly complex.

Do the Math! is a fresh look at the numbers of daily living, providing a thought-provoking guide to better understanding the world around us and enlightening consumers about misleading practice. Numerous creative examples and illustrative figures help to explain the realities of our ever-confusing mathematical world, and modern economic and contemporary social issues link mathematical concepts to real-world examples.

Do The Math…Understand “The Normal Curve” and “Debt and Demographics” in 100 seconds! Click Here.

Click here to view more writing from the author.

Do the Math! was featured in The Best Writing on Mathematics 2019, by Mircea Pitici, a book about the best mathematics writing since 2010.
Chapter 1. The doubling game: From Thomas Malthus to Bernie Madoff
Chapter 2. She told two friends and they told two friends and they told two friends and...
Chapter 3. The mathematics of change: A new world model
Chapter 4. Fairness and uncertainty: Who watches the watchers?
Chapter 5. Statistics made simple: The science of weighting
Chapter 6. A case for correlation: Sampling and inference from Shakespeare to death row to sports competitiveness
Chapter 7. Counting and computers: From Boole to Google and back
Chapter 8. Who to believe? Numbers and the art of deception
Chapter 9. Two kinds of people: Those who divide and those who don't
Chapter 10. How to get along: Be nice, clear your ice
Chapter 11. Cooperation: The art and science of agreement
Chapter 12. The roots of economic disaster: Making money from money

“This book is easy to understand and very readable. I very much enjoyed the author’s ability to use fables to explain mathematical concepts, he does manage to capture the reader’s attention right from the beginning.”

“I personally love the unabashed connection to morality, what you should do versus what you can do, which rarely shows up in books today.”

“The key strength is in the description of the problems that greed has created, and the impact that has on our physical and social environment. Equipping students with the knowledge to look at statistical reports on the economy, for example, and to be skeptical and know that there is more to the story in the numbers is very valuable, and could help make better consumers.”

“The key strengths of the text are the numerous examples and stories related to connecting political, economic, cultural, scientific, and mathematical concepts. Some stories are classic tales, some are current events, and others are hypothetical situations that all make the reader think and provide excellent visual matter.”

“The author does a good job demystifying some pretty sophisticated mathematical concepts through the use of engaging and entertaining examples.”

“Students…benefit from an understanding of the role of statistical analysis, probability and calculus in governmental systems, historical trending and political prediction. The text encourages readers to consider the larger implications of fundamental mathematical concepts.”