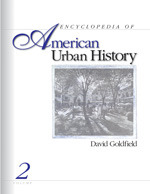 Share
December 2006 | 1 056 pages | SAGE Publications, Inc
Download flyer
We are an urban nation and have been so, officially at least, since the early twentieth century. But long before then, our cities played crucial roles in the economic and political development of the nation, as magnets for immigrants from here and abroad, and as centers of culture and innovation. They still do. Yet, the discipline that we call "Urban History" is really a phenomenon of post-World War II scholarship.

Now, after a generation of pathbreaking scholarship that has reoriented and enlightened our perception of the American city, the two volumes of the Encyclopedia of American Urban History offer both a summary and an interpretation of the field. With contributions from leading academics in their fields, this authoritative resource offers an interdisciplinary approach by covering topics from economics, geography, anthropology, politics, and sociology.

The Encyclopedia of American Urban History is a fundamental reference work intended to ground and inspire future research in the field. It is an essential resource for any academic library.

"This encyclopedia seems to have a unique niche...this work is recommended for undergraduate collections and libraries where urban planning and urban cultures are being studied."