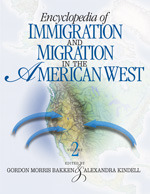 Share
February 2006 | 944 pages | SAGE Publications, Inc
Download flyer
To read some sample entries, or to view the Readers Guide click on "Sample Chapters/Additional Materials" in the left column under "About This Book"

Immigration from foreign countries was a small part of the peopling of the American West but an important aspect in building western infrastructure, cities, and neighborhoods. The Encyclopedia of Immigration and Migration in the American West provides much more than ethnic groups crossing the plains, landing at ports, or crossing borders; this two-volume work makes the history of the American West an important part of the American experience. Through sweeping entries, focused biographies, community histories, economic enterprise analysis, and demographic studies, this Encyclopedia presents the tapestry of the West and its population during various periods of migration. The two volumes examine the settling of the West and include coverage of movements of American Indians, African Americans, and the often-forgotten role of women in the West's development.

The Encyclopedia of Immigration and Migration in the American West brings new insight on this region, stimulates research ideas, and invites scholars to raise new questions. It is a must-have reference for any academic library.

The powerful two-volume Encyclopedia of Immigration and Migration in the American West is a winner: it will appeal both to high school and college library holdings in offering a definitive reference cataloging both key immigrants and key migration patterns of different ethnic groups in the American West. From entries on Chinese early immigrants to Japanese internment, discussions are sometimes several pages in length and conclude with bibliographic material for further reading. Contributors work for historical societies, museums, and universities and provide both authority and clarity.

"The scholarly coverage is as diverse as the region itself, stretching beyond the various ethnic groups crossing borders or landing at ports, and also encompassing the movements of Native American and African Americans, as well as the key role of women in the region's development. Included are biographies, community histories, demographic studies, and even entries on immigration law."

"In summary, this is one of the better works in a long line of scholarly compendiums of research and reviews on the relationship among families, health, and health care. The book moves the field along for investigators and policymakers and is a reasonable interest to clinicians."

"An eclectic, people-centered set of signed essays loosely tied together by the themes of immigration into and migration within the American West is presented here by Bakken and Kindel, following hard on the heels of Bakken's Encyclopedia of Women in the American West. Recommended for public and academic libraries with interest in the social history of the United States."

"This set includes numerous articles on Native American tribes, many biographical entries, and a variety of articles on cities and towns, ethnic and racial groups, and laws and policies. The extensive bibliography that appears at the end of each volume will be a valuable resource for students."

"The writing is engaging, sometimes stirring. Commentary on demographics and social interaction illuminates the roles of simple folk in the exploration and settlement of the Great Plains and the gradual decimation and displacement of First Nations. It is a worthy addition to academic and large public libraries."

"Particular strengths reside in separate entries on Indian tribes and on the internal migrations of African Americans and women. The encyclopedia devotes less coverage to its urban sketches, which are presumably meant to be representative rather then comprehensive, and to its articles on European and Asian groups. As the West is currently the fastest growing part of the US and arguably where the future of America lies, this is a noteworthy contribution to regional research that will be indispensable for area studies collections. Highly recommended."

"SAGE Reference recently published a title that is timely while offering valuable historical perspective. The articles in this encyclopedia tell a fascinating story of opportunity, enterprise and community building coupled with forced migration, natural disasters and exploitation. This encyclopedia is a worthy addition to both academic and larger public library collections where there is need."

Encyclopedia of Women in the American West