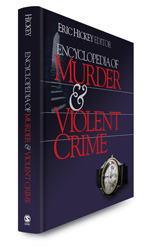 "As a good encyclopedia does, the Encyclopedia of Murder and Violent Crime brings together articles that offer diverse insights into the topic, while at the same time giving the reader a feel for its overall scope."
--AGAINST THE GRAIN

"This carefully researched and excellently presented compendium will be a welcome addition to all libraries."
--REFERENCE & USER SERVICES QUARTERLY

Murder and violent crime take many forms. Who are the perpetrators? What do they have in common and how are they different?

The Encyclopedia of Murder and Violent Crime presents the latest research, insightful commentary, and "true crime" case studies to help in the understanding and deterrence of one of society's gravest problems.

Although there is no easy or single answer to the question of why people kill or commit violent crimes, this important new reference work provides a wealth of information to create a background for cogent analysis.

Written for a Wide Audience

The Encyclopedia of Murder and Violent Crime is intended for a wide audience including school, public, and university libraries. It will also prove invaluable to those who report violent crime's unfolding stories, such as mass media news outlets, television and radio stations, editorial offices of magazines, and newspapers.

Criminal justice professionals will also find it valuable and fascinating balance of academic research and "true crime" material they can relate to in their own experience.

Edited by the World's Leading Authority on Multiple Homicide Offenders

A professor of criminal psychology at California State University, Fresno and adjunct professor for Fresno City College and the California School of Professional Psychology, Dr. Hickey has published and lectured extensively on the etiology of violence and serial crime. His book Serial Murderers and Their Victims, 2 nd Edition is used as a primary text in colleges and universities and by law enforcement in the study of the nature of violence, criminal personalities and victim-offender relationships.

Hickey's research is widely quoted and often is the subject of interviews in the media including National Public Radio, BBC, The Discovery and Learning Channels, Larry King Live, 20/20, and Court TV.

He recently developed a cyber-stalking training course for the National District Attorney's Association and the American Prosecutor's Research Institute. His latest research, a study of 220 victims of stalking, examines the psychology and classification of stalkers, victim-offender relationships, intervention and deterrence strategies for potential offenders, and modes of victim assistance.

Contributions From Over 100 Experts in the Field

The Encyclopedia of Murder and Violent Crime contains 200 entries covering long-documented classifications such as Serial Killers and Organized Crime to cutting edge topics of Cyber-Stalking, Kids Who Kill, and Terrorism.

Leading educators, psychologists, sociologists, anthropologists, and criminal justice professionals share their experience and insights on everything from Aggression and Antisocial Personality Disorder to the infamous Zodiac Murders.

The Encyclopedia of Murder and Violent Crime explores the topic in great detail, looking at a multitude of issues from all angles--academic and professional research, theoretical background, and actual case studies. This combined approach provides a well-rounded overview with both theory and its historical evidence.

Examines a Broad Range of Issues:

Plus a Detailed Look at:

"As a good encyclopedia does, the Encyclopedia of Murder and Violent Crime brings together articles that offer diverse insights into the topic, while at the same time giving the reader a feel for its overall scope."

"Its 24 subject areas and over 200 entries present a tightly focused blend of categories present in other criminological reference tools, such as family violence and organized crime, along with newer headings on government sanctioned violence, legal response to violent crime, cyber-stalking, and ethnic cleansing....Libraries holding criminology reference works will find this a useful supplementary source. This work is recommended for college and university libraries."

"This carefully researched and excellently presented compendium will be a welcome addition to all libraries."

"These authors have demonstrated an impressive body of academic and applied scholarship from diverse disciplines . . . The result is a topnotch reference book that will serve the needs of teachers and researchers, graduate students, undergraduates, practitioners, consultants, true-crime buffs, and general readers who are intrigued by the material. In short, the Encyclopedia of Murder and Violent Crime is simply too handy, complete, and scholarly to pass up."