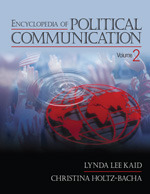 The Encyclopedia of Political Communication discusses the major theoretical approaches to the field, including direct and limited effects theories, agenda-setting theories, sociological theories, framing and priming theories, and other past and present conceptualizations. With nearly 600 entries, this resource pays considerable attention to important political messages such as political speeches, televised political advertising, political posters and print advertising, televised political debates, and Internet sites. The audiences for political communications are also central, necessitating concentration on citizen reactions to political messages, how the general public and voters in democratic systems respond to political messages, and the effects of all types of media and message types.

The Encyclopedia of Political Communication is designed for libraries, undergraduates, and members of the public with an interest in political affairs. Media and political professionals, as well as government officials, lobbyists, and participants in independent political organizations, will find these volumes useful in developing a better understanding of how the media and communication function in political settings.

"Expanding the scope of their previous works, The SAGE Handbook of Political Advertising (2006) and Political Advertising in Western Democracies (1994), Kaid (telecommunications, Univ. of Florida) and Holtz-Bacha (chair, political communication division, International Communication Assn.) have assembled contributions from dozens of academics from around the globe for this timely two-volume text exploring, in nearly 600 entries, the intersection of politics and media. Although it is international in scope, the encyclopedia's primary focus is the United States and, to a lesser extent, Europe. Each volume opens with an A-to-Z list of entries, followed by a listing of entries arranged by subject, closely mirroring the relevant listings found in the Library of Congress Subject Headings. Lucid and unbiased, the entries offer biographies of notable leaders (e.g., Zhelyu Zhelev of Bulgaria) and scholars and examine numerous theories, groups and organizations, key events, media outlets (e.g., the blogosphere), legal instruments, government institutions, and influential books and films critical to understanding of this complex, interdisciplinary field. While a comprehensive examination of every relevant topic in this discipline would be impossible in just two volumes, the editors come close to delivering just that. BOTTOM LINE This work is considerably more comprehensive (by about 700 pages) than CQ Press's single-volume Encyclopedia of Media and Politics. Such a wide-ranging exploration comes at double the cost of its competitor, however. Recommended for academic libraries."
—Library Journal