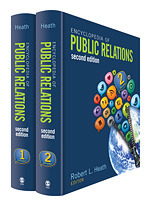 Share
September 2013 | 1 152 pages | SAGE Publications, Inc
Download flyer
When initially published in 2005, the two-volume Encyclopedia of Public Relations was the first and most authoritative compilation of the subject. It remains the sole reference source for any library serving patrons in business, communication, and journalism as it explores the evolution of the field with examples describing the events, changing practices, and key figures who developed and expanded the profession. Reader’s Guide topics include Crisis Communications & Management, Cyberspace, Ethics, Global Public Relations, Groups, History, Jargon, Management, Media, News, Organizations, Relations, Reports, Research, and Theories & Models. Led by renowned editor Robert L. Heath, with advisory editors and contributors from around the world, the set is designed to reach a wide array of student readers who will go on to serve as opinion leaders for improving the image and ethics of the practice.

The Second Edition continues to explore key challenges facing the profession, such as earning the trust and respect of critics and the general public. Much greater emphasis and space will be placed on a theme that was just emerging when the First Edition appeared: the Internet and social media as public relations tools. International coverage and representation has been greatly expanded, as well. Finally, biographies (which are now widely available on the Web) have been deleted to give room to areas of enhanced coverage, and biographical material are included where appropriate within the context of topical entries. However, a long entry on women pioneers in public relations has been included as an appendix.