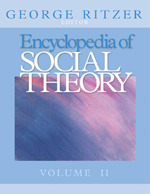 The Encyclopedia of Social Theory is an indispensable reference source for anyone interested in the roots of contemporary social theory. It examines the global landscape of all the key theories and the theorists behind them, presenting them in the context needed to understand their strengths and weaknesses.

Led by internationally renowned scholar George Ritzer, the Encyclopedia of Social Theory draws together a team of more than 200 international scholars covering the developments, achievements, and prospects of social theory from its inception in the 18th century to the present. Understanding that social theory can both explain and alter the social world, this two-volume set serves as not only a foundation for learning, but also an inspiration for creative and reflexive engagement with the rich range of ideas it contains.

"On the whole, this will be a useful resource for beginning researchers in the social sciences, or users requiring basic definitions or biographies. Recommended for large public and academic libraries."

"Ritzer has assembled a wonderfully rich resource on social theory. Any subject encyclopedia's aims are to be on point, authoritative, and intelligible, and to lead readers to further information; Ritzer's meets those aims. . . . Highly recommended."

This scholarly guide surveys the fundamental ideas of social theory and the contributions of social theorists from the Enlightenment to the present. . . . this useful guide provides an excellent starting place for both student and scholar, and it is highly recommended for academic libraries.